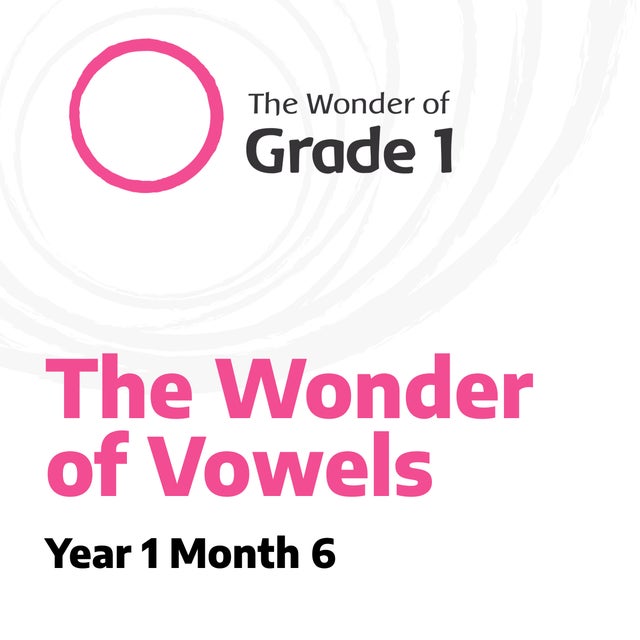 Grade 1 Month 6 The Wonder of Vowels

SKU: g1m6
CA$44.00
CA$44.00
Unavailable
per item
If consonants are the ‘story letters’ that describe the outside world, vowels are the ‘feeling letters’ that describe the inside world. For example, what sounds do we express when we see a baby? A bear? A vista? This unit will bring the vowels into the mix of consonants and continue work with phonics rules. Multicultural stories will form the basis of this unit.


​This purchase is for a digital download (PDF) of 1 month of curriculum and includes access to our members-only area with supporting documents, videos, resources and community for one month.
Add to Cart

Language Arts: Concept: Stories and other texts can be shared through pictures and words.
Connection: Your child will be hearing stories every day and using those stories to build images related to central ideas.
Concept:  Curiosity and wonder lead us to new discoveries about ourselves and the world around us.  Connection: As your child hears stories and connects letters to them, they will begin to see the world as full of letters!
Concept:  Playing with language helps us discover how language works.
Connection: Your child will work with verses and songs that play with language and sounds.

​Science: Concept: Observable patterns and cycles occur in the local sky and landscape.
​Connection: Your child will uncover the relationship between the feeling letters (the vowels) and the cycles and patterns in nature.

You have completed the two units that brought the consonants and some ways to strengthen the recognition between letter and sound (phonemic awareness).  You worked with a variety of games for gaining strength in phonemic awareness as well as practice for precision of forming the letters.  Well done!  During this unit you will bring the vowels.  Think of the consonants as the ‘story letters’; they tell us about the world.  While the vowels are the ‘feeling letters’; they tell us about the feelings in the stories.  For example, what do you say when you see a sunrise?  “OOOOoooooo”, right?  What do you say when you see a baby?  “Ahhhhhhh”, right?  We express feelings through the sound of the vowels.  You will bring the vowels much the same way you did with the consonants, through story, imagery, and anchor words.  You will also bring the first four phonics rules.  You’ll need to prepare some word cards for Day 7 and beyond.  See Parent Preparation for details.  The project for Flex Week is filling in a Reader Mandala.  If you intend to complete the project, you’ll need readers at your child’s level.  Readers range widely and wildly, meaning they don’t all follow the same leveling.  The simplest readers I have ever encountered are ‘Bob Books’, and the most complex that also claim to be early readers, are any from the library such as the ‘Frog and Toad’ series.  You know your child - find some readers that you think will suit them after three weeks of practice during this unit.  The project will have them coloring in a Mandala, bit by bit, as they finish a book.  The goal will be to colour in the whole mandala so you’ll want to choose readers that will support your child’s best chance at success.

This month you will need ‘anchor words’ for each vowel.  You will also need the following word cards:

For each of the phonics rules, your child will create a page with the rule at the top where they can collect words that follow the rule, over time.  Your word cards are for practicing daily with games.  Be sure to incorporate them AFTER you bring the phonics rule.  You can continue collecting words during all units of the year.  You’ll also want to read each day’s plan ahead so you know what to expect and what story will be needed for the day.  Whatever your practice for preparation, know that you’ll be working with verses, songs, rhyme collections, alliterative collections, and stories.