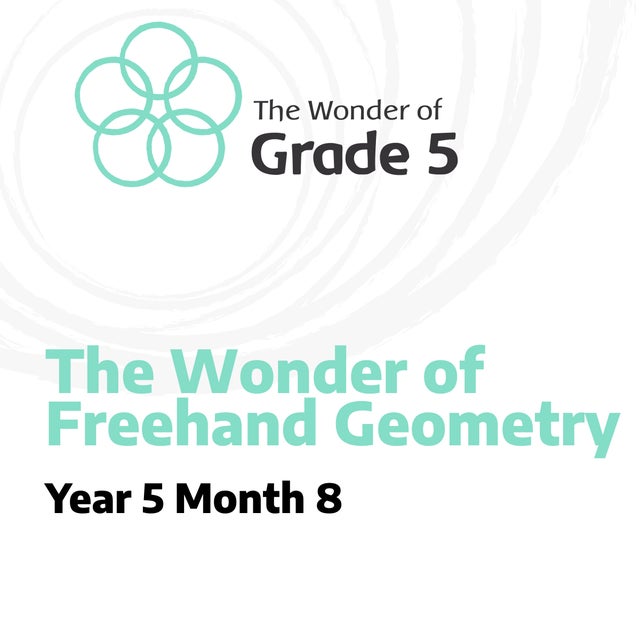 Geometry, the study of earth and measure, is brought through the wonder of shapes and designs. Observing nature and patterns in our lives, the everyday shapes we are surrounded by are brought to life in their full glory. Students practice their drawings freehand for the final time.

This purchase is for 1 month of curriculum and includes access to our members-only area with supporting documents, videos, resources and community.

Geometry, the study of the earth and its measure, is brought through the wonder of shapes, designs and ancient discoveries. Observing nature and patterns in our lives allows the everyday shapes we are surrounded by to be brought to life in their full glory. Your child will practice their drawings in freehand for the last time. Daily Wonder introduces the compass for Grade 6 Geometry. However, during this unit your child will get to make their own compass to try drawing circles. For the most part, this unit asks your child to continue to exercise and develop their hand/eye abilities in order to create the shapes they see in their mind’s eye. Freehand drawing develops a deeper sense of balance and spatial awareness.  Some of this learning will require the use of a ruler, so that measurements are accurate. Your child will hear about the beginning of geometry and its ancient uses. This unit will cover the study of lines, angles, regular and irregular polygons, circles, quadrilaterals, triangles, 1D, 2D and 3D shapes and the classification of prisms and pyramids. They will work with square numbers, area and perimeter. They will be introduced to Pythagoras, and his famous theorem.

At the same time, your child will read The Adventures of Achilles by Hugh Lupton (a child-friendly version of The Iliad). This story about the Trojan War describes a ten year battle, where each side is assisted by different gods, but neither side can win. Finally, crafty Odysseus, one of the Greeks, comes up with a brilliant plan that wins them the war. This is the most important story from that time period because it marks the change in consciousness that occurred during the Greek civilization where humans began to rely on their own mental powers instead of pleading to the gods. The Golden Age of Greece then began, and it was a flowering of the minds, hearts and deeds: it saw the growth of philosophy, science, medicine, drama, poetry, art, sculpture, architecture, democracy and more. It was witness to the genius of Homer, Aristophanes, Euclid, Socrates, Plato, Aristotle and many more. It showed the world what human beings could achieve. These stories show your child that they can be whatever they wish to be and that each person’s uniqueness should be expressed and celebrated.

The Adventures of Odysseus, which is a child-friendly version of The Odyssey, is the sequel that your child will read during The Wonder of Ancient Greece coming up.