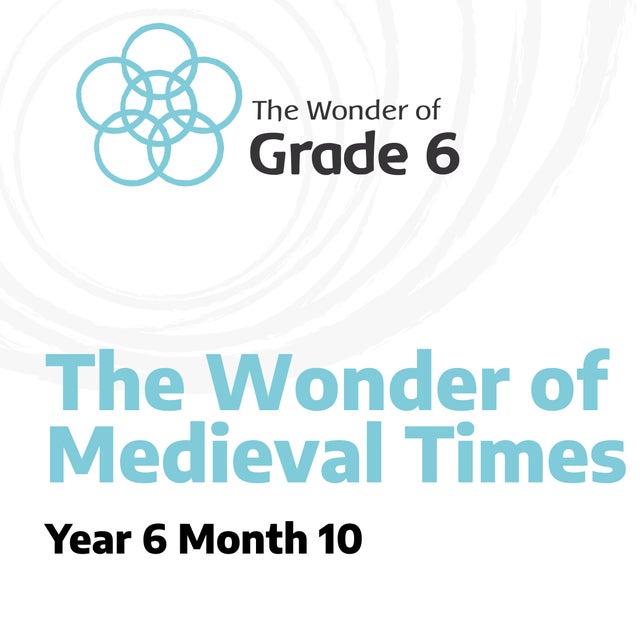 Students will delve into the history of the feudal system of Europe. This will cover the Rise of Islam and the time of the Crusades.

​This purchase is for 1 month of curriculum and includes access to our members-only area with supporting documents, videos, resources and community.

Social Studies: Concept: Economic self-interest can be a significant cause of conflict among peoples and governments.
Connection: Your child will learn about the feudal system, and the economic disadvantage to the lower class in society.

Math: Concept: Properties of objects and shapes can be described, measured, and compared using volume, area, perimeter, and angles.
Connection: Your child will work with these concepts and review skills. They will use their Grade 6 math workbook and online resources.

Science: Concept:  Newton’s three laws of motion describe the relationship between force and motion.
Connection: Your child will build a model of a medieval catapult and experience the three laws:

This unit will cover the period in history after the fall of the Roman Empire all the way up to the late Middle Ages. The late Middle Ages, beginning around the 14th century is covered in Daily Wonder Grade 7. The Wonder of Medieval Times will look at the decentralization of power in Europe after the fall of the Roman Empire. Suddenly there were tribes spread out across the land, warring with each other. Reading and writing, recorded information and the ancient Greco-Roman wisdom that had been developed up to Roman Times had been “lost”. This period is often referred to as the Dark Ages because historians know so little about it due to the lack of information written down. Slowly the tribal leaders begin conquering and claiming larger pieces of land and becoming rulers or kings of those parcels of land. Roaming thieves and bandits create an unsafe environment for the regular farmers and peasants throughout Europe. The Feudal system basically arises as a way of offering protection to the most vulnerable of society. However, in doing so, the rulers require the peasants to farm the land, and produce and generate food for the population of their land. This becomes a system that keeps the peasant indebted to the king, without a way of growing their own wealth or moving up in society. A whole feudal society is put in place where knights are given prestige and land in exchange for being loyal to the king of that land. They are ready at any moment to be called into battle. Wars are a constant part of Medieval times. There are wars throughout Europe, as well as the Crusades and the Holy Wars, between the Christians and the Muslims. Famous leaders such as Charlemagne and Richard the Lionheart will be highlighted. The absolute power of the kings in the land become too unbalanced, and the nobility just below the king begins to rebel. What comes out of this rebellion is the signing of the document called the Magna Carta. It creates provisions to ensure that power is not solely in the hands of the king. This is a powerful step in setting the stage for democracy. It defines the end of the high Middle Ages and is where this unit comes to an end.